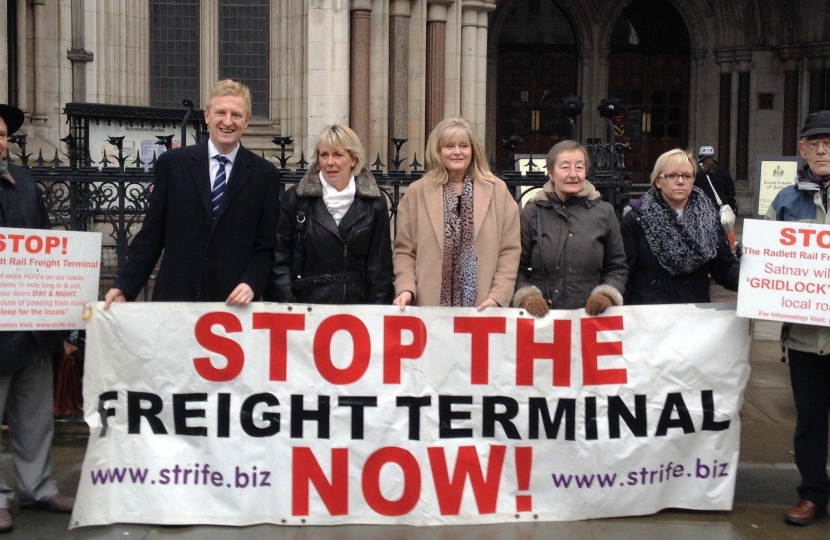 I continue to believe that the proposal for a Rail Freight Terminal is completely inappropriate for our area. I have expressed this view publicly on many occasions. It will blight our precious countryside, clog our roads and severely disrupt the Thameslink train service.

Even though the proposed development is in St Albans, outside of my constituency, its impact would be felt acutely in Hertsmere, particularly in Radlett. Since my selection as the Conservative Parliamentary Candidate for Hertsmere, I have therefore done all that I can to support Strife in its campaign against it.

The decision by St Albans District Council not to pursue their legal challenge against the decision by the Department for Communities and Local Government to grant permission effectively marks the end of the planning process for this project. I intend though to continue to work closely with Anne Main, MP in St Albans, to explore every possible avenue to frustrate this proposal.

First, I am unconvinced that there has been a proper assessment of the impact of the Terminal on the Thameslink commuter service. Rail freight trains would have to pass through the Elstree tunnels, which are in Hertsmere. I understand that the tunnels cannot currently accommodate the trains proposed for the Terminal. Extensive works would need to be undertaken to lower the tracks and/or expand the tunnels to accommodate the trains. This would be a major project with considerable cost that would almost certainly necessitate the closure of at least one tunnel to accommodate the work.

In order to get answers to these questions, I will continue to press Network Rail and relevant government departments through letters, parliamentary questions, and if necessary, Freedom of Information Act disclosure requests. I am also prepared to ask direct questions of the Ministers in the Commons chamber to elicit the answers we require. The project should not proceed until there is clarity over these points and the work has been completed. We cannot have a rail freight terminal that freight trains cannot access and taxpayers MUST NOT bear the cost of this folly.

Finally, if there is to be development on the land in question, then any development would be better than the Terminal.

I have already met with St Albans District Council, Hertfordshire County Council, the Local Enterprise Partnership and other potential developers to discuss whether an alternative use is possible for the site. Hertfordshire County Council should properly consider all other options for development of the site, particularly those that potentially put a greater value on the site.

I will do everything I can to help facilitate alternative options.

I appreciate that this battle has been ongoing on for many years and I particularly commend the Strife campaign. I fought the general election on three key pledges. One of these pledges was to do all I can to protect our green belt and another was to improve transport services. The proposal for the Radlett Rail Freight Exchange would be detrimental to both pledges. I was only elected in May but please be assured that my resolve to fight the proposal is strong. I will do my utmost to represent my constituents whose quality of life will be blighted by this proposal.