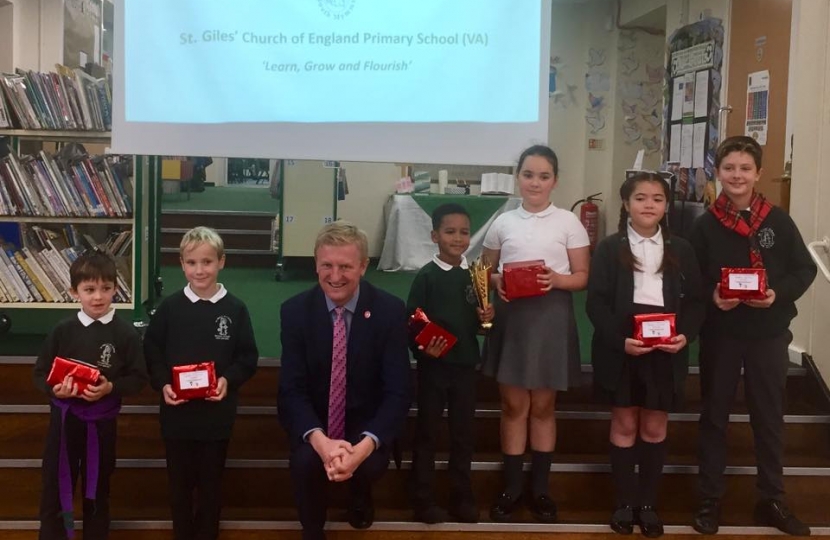 Oliver was invited to the School by their Headmaster, Mr Keith Smithard, to award the prizes for the final of their ongoing Speakers Cup competition. Each child at St Giles’ Primary School had to prepare a speech and only one child from each Year Group was selected to go through to the final.

The topics of the speeches which the children made in the final included the Scouts, Karate, playing the Piano and the Battle of Britain Memorial Flight. In the end, Nicholas in Year 1 won with his speech on Climate Change.

After their speeches, Oliver spoke to the pupils at the school and answered their questions about his work as the local Member of Parliament.

After the event, Oliver said: ‘It was a real delight to visit St Giles’ Primary School in South Mimms for their Speakers Cup prize giving ceremony.

I enjoyed all of the speeches which the children made and I would like to congratulate the winner of the competition, Nicholas in Year 1, for his excellent speech on Climate Change.

It is always a pleasure to talk to the children and answer their great questions.’

Oliver has criticised the decision taken by St Albans District Council to remove the Park Street Garden Village from their local plan in favour of a rail freight terminal.

Oliver has consistently fought against this terminal, which borders his Hertsmere constituency.