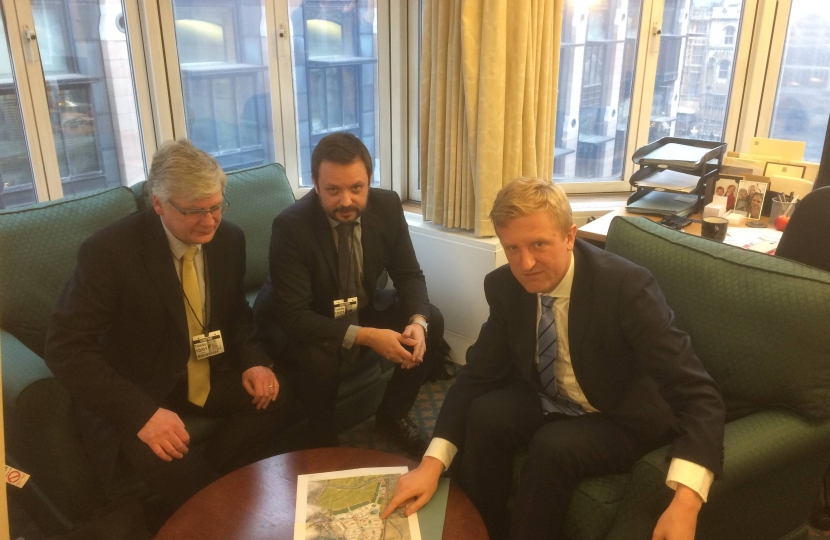 Oliver has met Hertfordshire Local Enterprise Partnership and sought their support for the proposed site of the Radlett Rail Freight Terminal to be used for much needed housing and commercial space to support Hertfordshire’s thriving creative industries.

It comes as the government consultation on its Industrial Strategy highlighted the importance of supporting the creative industries - one of the fastest growing sectors in the UK economy.

In response to questioning in Parliament from Oliver on the strategy, Business Secretary Greg Clark agreed that if investment in the film and television industry supply chain is to continue, a ready supply of commercial office space is essential.

Oliver has also responded to a consultation on Hertfordshire Local Enterprise Partnership’s refreshed Strategic Economic Plan, which provides a blueprint for economic growth up to 2030.  In his response, Oliver suggested the green belt designated site near Radlett should be used for new housing to meet growing demand and commercial space to support the new jobs at both Elstree Studios in Hertsmere and Warner Bros. Studios Leavesden.

The LEP’s strategic economic plan for Hertfordshire recognises Elstree and Borehamwood and Leavesden as a well-established locations for film and television production, which have also seen growth in the video gaming industry. The plan also highlights the availability of housing and employment space as one the most significant obstacles to economic growth in Hertfordshire.

Oliver said: ‘We have a particular strength in the creative industries.  This is centred around the Elstree Film Studios, which for the last century has been a world renowned location for film and television making – producing titles such as Star Wars, The King’s Speech and The Crown.

‘It is supported by BBC Elstree Centre and the nearby Warner Bros Studios Leavesden as well as Elstree University Technical College and the University of Hertfordshire.  The industry is forecast to grow and there is significant scope for expansion with new high skilled jobs and investment in the supply chain.’

‘The Business Secretary’s response to my questioning in Parliament and the recent Industrial Strategy Green Paper demonstrates how he shares my view that more high-quality commercial space is needed for the sector to continue to thrive.’

Oliver added: ‘I believe the site near Radlett is well-positioned to meet the demand for new residential and high-quality office space.  This would enable Hertfordshire to capitalise on its strength in the creative industries and to meet the high-skilled jobs and housing needs of its residents.

‘I urge St Albans District Council to remove the green-belt designation of this blighted site so that bids to use the land for this purpose can be considered.’

At the meeting, Oliver and the LEP also discussed how their refreshed economic plan can benefit other parts of the constituency.