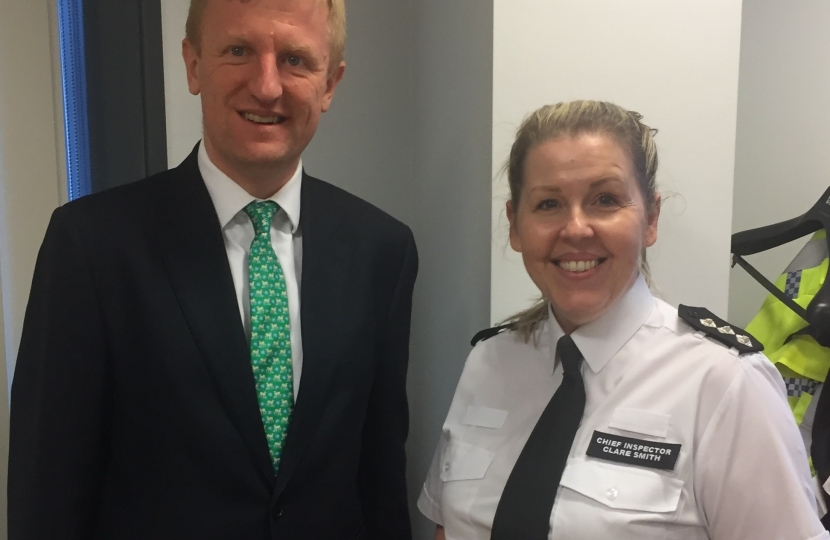 Oliver met with the new Chief Inspector of Hertfordshire Constabulary, Clare Smith to discuss crime and policing in Hertsmere.

They discussed the approach which the police are taking to tackle burglaries, car theft and the theft of jewellery – all of which have bene raised with Mr Dowden by constituents.

They also discussed the steps which are being taken to address community safety in Hertsmere since the attacks on Mosques in New Zealand and the recent incident of anti-Semitic graffiti in Shenley.

The recent £1 billion funding settlement for the police services and the recruitment of additional police officers were also discussed.

Speaking after their meeting, Oliver said ‘It was a pleasure to meet with the new Chief Inspector of Hertfordshire Constabulary, Clare Smith, at Borehamwood Police Station.

I look forward to working with her to make Hertsmere a safe place to live and to strengthen security for all our communities.’

Chief Inspector Clare Smith has been in post since January, she took over from Steve O’Keeffe.

Oliver has criticised the decision taken by St Albans District Council to remove the Park Street Garden Village from their local plan in favour of a rail freight terminal.

Oliver has consistently fought against this terminal, which borders his Hertsmere constituency.