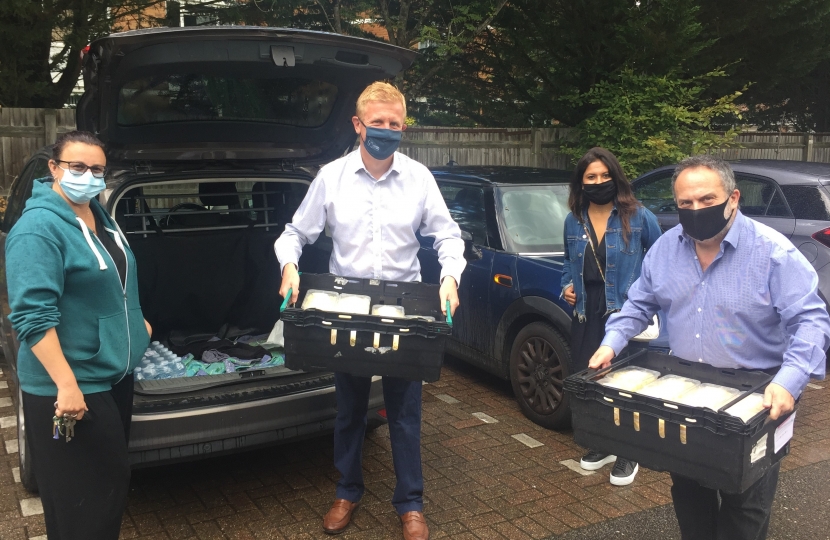 Oliver has thanked the volunteers who organised Borehamwood’s summer meals programme and helped to distribute thousands of meals to hungry children and families over the Summer.

The Summer meals programme was organised by Councillor Meenal Sachdev, the GMSP Foundation and Gratitude, a charity run by John and Sheila Carlisle which provides food and support to families in Borehamwood.

The project ran for six weeks during the school Summer holiday, between July 22 – September 1. It targeted the children in Borehamwood who are eligible for free school meals as a way to supplement their diet over the Summer and support vulnerable families.

The programme and its volunteers have hand delivered freshly-cooked, vegetarian meals to over 200 children and families each day and the families were also able to collect fresh and tinned produce from the programme’s base at Allum Manor Hall as well. In total, it has given over £260,000 in food to Borehamwood families over the last six weeks.

Oliver, along with Cllr Morris Bright, the Leader of Hertsmere Borough Council, joined the volunteers to thank them for all their hard work and awarded certificates to those who have given up their free time to help Borehamwood’s most vulnerable families.

Speaking after the event, Oliver said: ‘It was a real privilege to help out at the summer meals programme in Borehamwood which Cllr Meenal Sachdev and Gratitude have set up.

Over the past few weeks, it has helped to give over £260,000 in food to hundreds of local children and I know how valuable its support has been to them at this difficult time.

It was an honour to thank all those who have helped to make this happen for their hard work and dedication.’

You may be aware that today Hertsmere has been designated as an area of concern by the Department of Health.