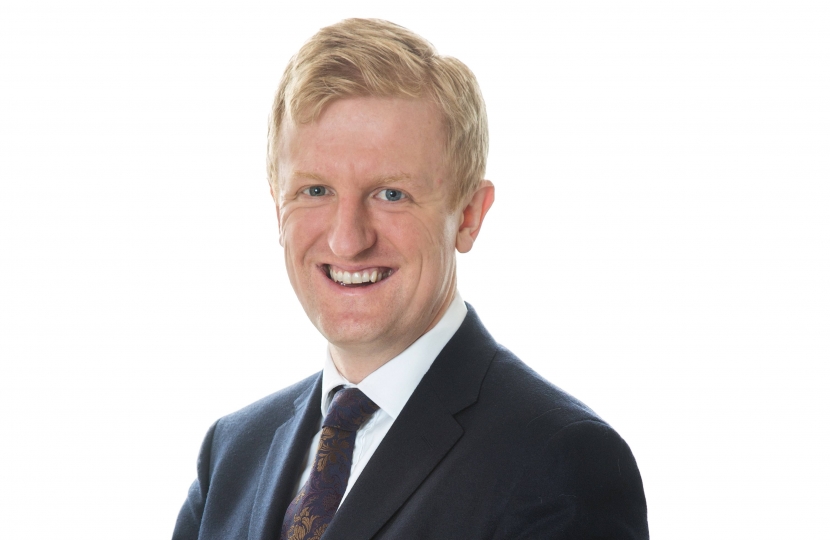 Oliver has raised his concerns about the local planning process in Parliament during Business Questions. Oliver's comments follow news that Sustainability Developments Ltd are now proposing to build over 600 homes on green belt land between Northaw and Cuffley. Oliver has previously raised concerns about the Royal Veterinary College's plans for over 150 homes on green belt land just outside Little Heath.

Oliver said: "Both of these proposed developments are just outside my constituency, but if they went ahead there would be significant pressure on schools, health services and other infrastructure in Potters Bar. The people living in these new developments would look to Potters Bar, adding pressure to already strained infrastructure. I am therefore opposing both schemes."

Oliver’s concerns have been heightened by figures he has seen indicating that the number of projected school places provided by schools in Potters Bar is struggling to keep pace with demand. For 2016/2017 there are 554 secondary school places available in Potters Bar for a projected 537 pupils. However, in 2017/2018 there is projected to be a deficit of 6 places and a deficit of 26 places for the school year 2019/2020.

Oliver said: "Clearly these figures demonstrate that schools in Potters Bar are already at capacity. They cannot handle the demand that will likely be placed upon them by the proposed developments in question. It is not right that in meeting their housing targets a local authority places an undue strain on the infrastructure and services of a neighbouring authority. In total these proposed developments amount to just shy of 800 homes. As well as concreting over precious countryside they would also place an unacceptable burden on Potters Bar."

In Parliament Oliver said: "In Potters Bar there are proposals for more than 750 new houses on the edge of town but in a neighbouring authority. Will the Deputy Leader of the House find time for us to debate the importance of the 'duty to cooperate' in local planning processes so that planning decisions properly take into account the needs of residents in places like Potters Bar."

Oliver added: "I have written to Welwyn Hatfield Borough Council to register my concerns and I am keen to bring these proposed developments to the Government's attention. There appear to be an increasing number of examples of local planning authorities not cooperating fully and placing unfair burdens on their neighbouring authorities. I am keen to secure the appropriate guidance from the Department for Communities and Local Government."