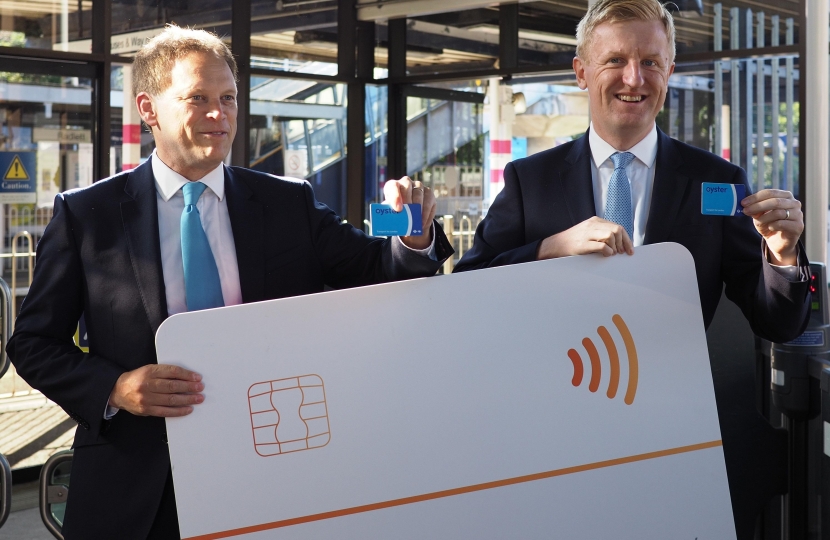 Oliver has officially opened up Potters Bar and Radlett stations to the use of Oyster and contactless cards.

Oliver was joined by Transport Secretary Grant Shapps at Radlett Station to officially mark the arrival of Oyster and contactless cards to both Radlett and Potters Bar stations.

This is the result of Oliver's long campaign to see Oyster delivered to Radlett and Potters Bar, which has been one of his key priorities as Member of Parliament of Hertsmere since he was elected in 2015.

He has met regularly with Rail Ministers and the Transport Secretaries over the past three years to argue for Oyster technology to be extended to Radlett and Potters Bar and lobbied for the funding to see it secured.

He secured its delivery to the stations at the end of last year and since then has continually pressed the need for it to be made operational as soon as possible. After the short ceremony at Radlett, the system is now fully online and operational for passengers to use.

For passengers who travel irregularly or prefer to ‘turn up and go’, Oyster and PAYG will be the most convenient and cheapest option to travel.

Speaking after the event, Oliver said: ‘I am delighted after years of campaigning that Oyster and contactless cards have now come to Potters Bar and Radlett.

It was a pleasure to welcome the Transport Secretary to Radlett for the formal opening this morning.’