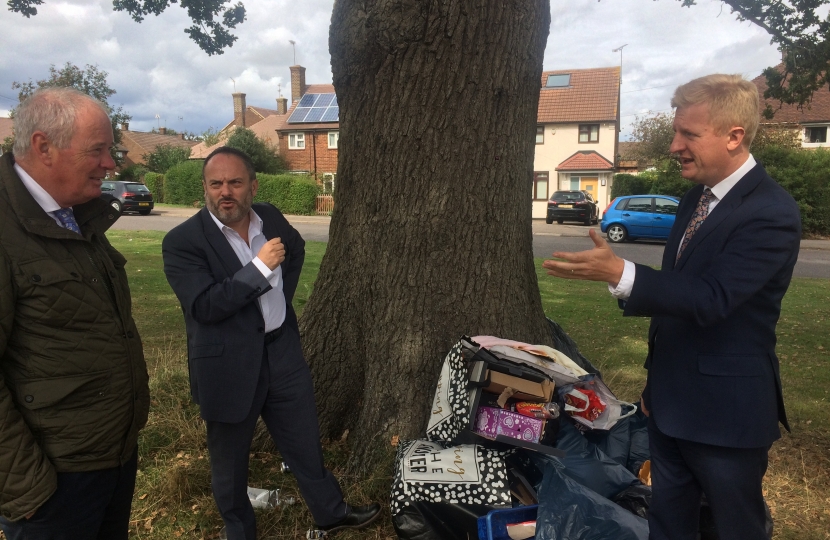 On Friday, Oliver and Morris Bright, Leader of Hertsmere Council inspected the aftermath of the unauthorised traveller camp at Ripon Park, Borehamwood.

The two were appalled by the waste left over from the camp and speaking afterwards, Oliver said: ‘Since this situation began, I have been in close contact with Hertsmere Borough Council and the Police.

‘I urged them to do everything within their powers to remove the camps as soon as possible and was therefore glad to see that they were evicted from Borehamwood on Thursday.

‘To prevent these unauthorised camps setting up in future, I believe more action needs to be taken and for this reason I met with the Leader of the Council on Friday.

‘I raised my constituents’ serious concerns with him and I am glad the Council are now looking at a range of extra measures to prevent future unauthorised incursions.

‘I have also spoken to my ministerial colleagues in the Government and made the case for them to implement much stronger anti-trespass laws, similar to those that have been enacted in Ireland.

‘They recognise the seriousness of this problem and I was pleased to hear they are looking closely at this option and are considering new proposals.’

Cllr Bright said: ‘Hertsmere is proud of its green fields and great open spaces. Sadly we have seen in recent times an upsurge in traveller incursions in the Borough. This not only causes huge upset for those wishing to enjoy our parks and open air facilities but also the mess that gets left behind is both unpleasant, anti-social and sometimes dangerous too.

‘The Council will continue to look at ways of preventing traveller access to our land without detracting from the enjoyment for residents and visitors. We are also pleased to be working with Oliver Dowden CBE MP to bring this matter to Government attention. We need more powers to deal with such incursions quicker.’