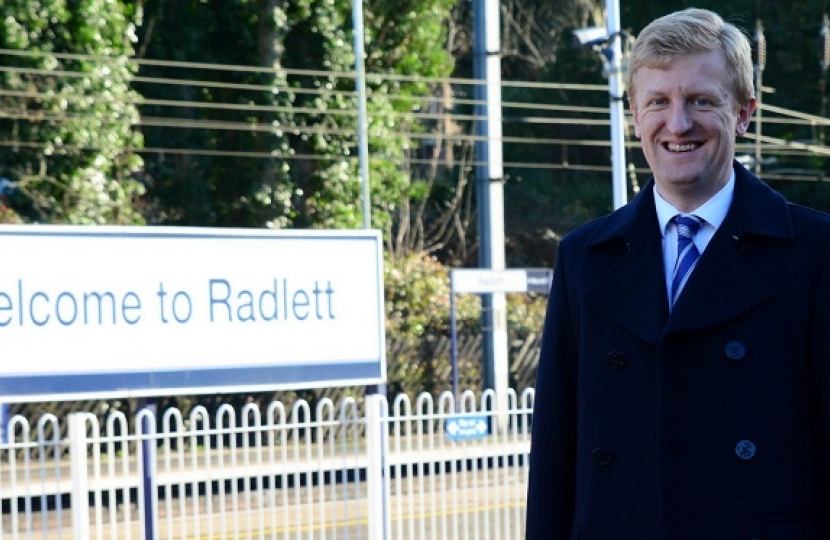 Member of Parliament for Hertsmere, Oliver Dowden, is continuing his campaign for Oyster PAYG to be extended to Radlett. Oyster PAYG was originally meant to be extended to Radlett by 30 September 2015. However, the extension has been delayed due to a number of complications. Since being informed of the delay Mr Dowden has raised the matter directly with senior representatives from Govia and TfL as well as the Rail Minister. Mr Dowden said: "Over the past few months I have been keen to establish what the facts are with regard to the planed extension of Oyster PAYG to Radlett. I have been disappointed by the degree of confusion there appears to have been with regard to who is responsible for the planned extension. I remain determined to keep the pressure on and to secure answers. "I am aware that the cost of train travel for many Radlett based constituents is a significant issue and I think that extending Oyster PAYG to Radlett would be a significant step in the right direction." Mr Dowden has tabled a Parliamentary Question with the Rail Minister and has contacted senior representatives at TfL to seek clarity. In her response to Mr Dowden's question, Rail Minister, Claire Perry MP, informed Mr Dowden that significant upgrades would need to be made to the Oyster back office for the Radlett extension to take place. This was confirmed in a letter that Mr Dowden received from TfL's Chief Technology Officer, Shashi Verma. In the letter TfL state that major problems were caused during previous extensions of Oyster PAYG to stations outside of Greater London, such as Borehamwood station. This was due to the difficulties associated with accommodating the national rail fare structure into London's zonal system. TfL have confirmed that they are adapting the Oyster back office so that fares can be set more flexibly. This would allow TfL to resolve the problems that were associated with previous extensions. The upgrade to the Oyster back office is also needed to support the new Elizabeth Line to Reading. TfL have informed Mr Dowden that the work will be completed by 2018 at which point they envisage Oyster PAYG will be extended to Radlett. Mr Dowden added: "Though disappointed with the significant delay, I am glad that I finally have an understanding as to the steps that need to be taken for Oyster to be extended to Radlett. "I appreciate that there are a number of technical difficulties relating to the extension and it was good to hear that there is a clear road map to be carried out for the technical works necessary for fares to be set more flexibly. "I will me meeting with senior representatives from TfL over the coming weeks to discuss this further and learn more about the planned upgrade to the Oyster back office. I am also keen to ensure that there is a firm commitment from both the Department for Transport and Govia for Oyster PAYG to be extended to Radlett once the upgrades to the Oyster back office have taken place."