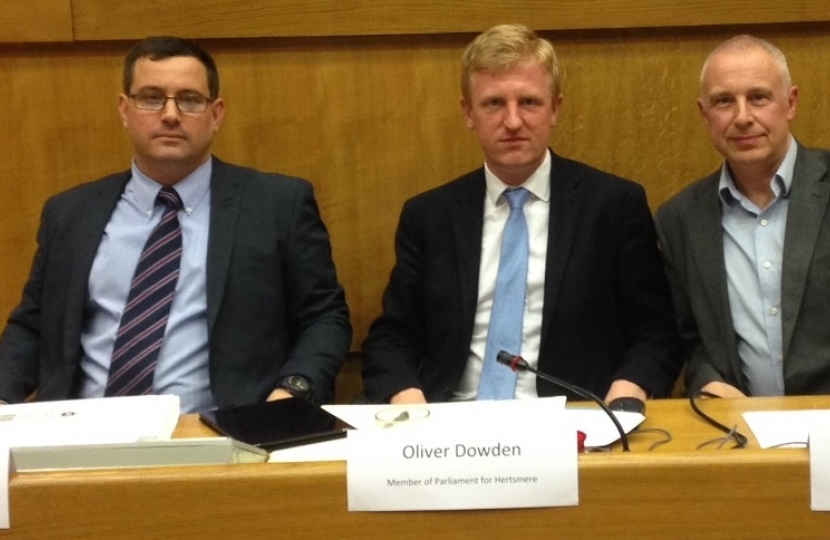 Member of Parliament for Hertsmere, Oliver Dowden, chaired a public meeting last Thursday with representatives from both Govia Thameslink and Network Rail. The meeting took place at the Hertsmere Borough Council offices in Borehamwood and was attended by over 50 disgruntled commuters who expressed their disappointment with the service provided by Govia.

The event was attended by a number of Govia representatives, including the Passenger Services Director, Stuart Cheshire, who made a presentation. Network Rail's Area Director, Gary Walsh, also attended the meeting to answer questions. It was agreed at the end of the meeting that there will be a further public meeting in six months time to monitor progress.

"I am glad that so many hard pressed commuters took the opportunity to attend the meeting and raise their concerns directly with the representatives from Govia and Network Rail. As a commuter on the line myself I was not surprised to see how frustrated so many of the constituents are with the Thameslink service.

"Since Govia took over the Thameslink franchise last year I have received a huge amount of correspondence from constituents exasperated with the shortcomings of the service. I thought it was important that Govia and Network Rail representatives were made fully aware of quite how fed up people are with the Thameslink service."

Though Govia admitted that the service is not as reliable as they would like it to be and that they sympathise with rail users, they said it was unfair to compare their performance with that of First Capital Connect who held the Thameslink franchise before them. Govia claim that ongoing engineering works at London Bridge have meant that capacity on the line has been severely reduced and that this has been the key reason for and increased number of cancellations and delays on the Thameslink line. Govia informed the audience that they were told by Network Rail that the impact of the works at London Bridge on passenger services would be minimal.

When asked by Mr Dowden when rail users can expect an improved service, Govia stated that the service will be unable to operate at full capacity until the London Bridge engineering works are completed in 2018. However, a new fleet of 8-12 carriage trains will be introduced before this time and a number of train drivers are currently completing their training so it is hoped that rail users will begin to see a noticeable improvement over the year head. Govia stated that the completion of the work at London Bridge would significantly increase capacity on the line and would also lead to the introduction of a new time table that would result in more trains stopping at Borehamwood and Radlett stations.

"I appreciate that not all the problems on the Thameslink service are due to Govia. Clearly the ongoing Network Rail led engineering works at London Bridge have been one of the key causes of delays and cancellations. I am hopeful that as train drivers complete their training and as the new fleet of 8-12 carriage trains are introduced over the coming year rail users will begin to see a noticeable improvement in the service.

"However, until the engineering works at London Bridge are completed in 2018 and a new timetable is introduced, the service will unable to run at full capacity.

"London Bridge aside, I believe that there are steps that Govia could take over the next year that are within their control that could lead to immediate improvements. It is for this reason that I am discussing with Govia the possibility of a follow up meeting in six months time to discuss what actions have been taken."

Concerns were raised at the meeting about the lack of announcements by train drivers and poor customer service. At certain times of the day the first class section of train carriages can be used by rail users possessing a standard class ticket.However, a number of rail users at the meeting complained that this is rarely communicated to customers. Govia admitted that there is an issue with drivers not making announcements when they need to and that this is something they need to improve on.

In response to complaints about overcrowding at Borehamwood station, Network Rail informed the audience that they had conducted an investigation at the station. Following the investigation both Network Rail and Govia acknowledged that there is a key congestion point and that this needs to be resolved. Network Rail and Govia are currently looking into plans for overcoming the issue. In January Mr Dowden wrote to the Rail Minister calling for investment at Borehamwood station.

Rail users at the meeting also raised concerns about the possible closure of station ticket offices at Borehamwood and Radlett stations.

"I know that many passengers prefer to buy from the ticket office rather than from a ticket machine. I have concerns about what the closure or partial closure of ticket offices might mean for the vulnerable and less technically minded. There are certain services that only a staffed ticket office can provide.

"Govia's representatives were keen to stress that whatever happens there will still be people selling tickets on the platform using portable machines, however, I don't think this would be the same as having a staffed ticket office. Phasing out train ticket offices would represent a significant cultural change and it is one that I have many reservations with."

Commenting on how the meeting went, Mr Dowden added:

"Overall I think this was a productive meeting and I hope the attendees found it useful. However, actions speak louder than words and I am keen hold a similar meeting in six months time to discuss what progress has been made. I hope this is the start of an ongoing productive dialogue between rail users and rail providers.

"I will be following up on a number of issues after the meeting and will continue to monitor the performance of the service very closely."