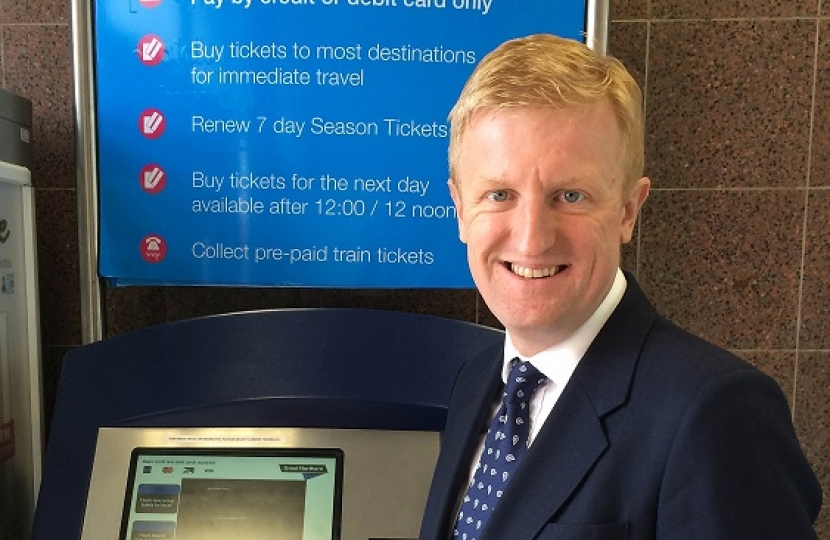 Oliver Dowden, Member of Parliament for Hertsmere, has welcomed changes to Govia's plans to close train station ticket offices. Earlier this year Govia put out proposals for public consultation to close a large number of train station ticket offices at the 84 stations that it manages. The consultation closed on 13 March and many rail users expressed concern about the proposals. Both of the main consumer groups for rail users, London Travel Watch and Transport Focus, opposed the proposals, as did the RMT Union who represent rail and transport workers: http://www.londontravelwatch.org.uk/news/view?id=587&x[0]=news/list , http://www.transportfocus.org.uk/research/publications/gtr-consultation… Govia's initial proposals included closing the ticket offices at both Elstree & Borehamwood and Radlett train stations. In March, Mr Dowden hosted a well attended public meeting in Borehamwood with senior Govia representatives so that rail users could raise their concerns about the planned ticket office closures and the unreliability of the Thameslink service. A number of rail users raised concerns about Govia's plans and following the meeting Mr Dowden has made very strong representations to Govia calling for them to drop the plans to close the Borehamwood and Radlett ticket offices. In April Mr Dowden said: "I know that many passengers prefer to buy from the ticket office rather than from a ticket machine and I have concerns about what the closure or partial closure of ticket offices might mean for the vulnerable and less technically minded. There are certain services that only a staffed ticket office can provide. I plan to make very strong representations to Govia over the coming weeks calling for the plans to close the ticket offices at Borehamwood and Radlett to be dropped." This week, Govia announced that it no longer plans to fully close the Borehamwood and Radlett station ticket offices. Both stations’ ticket offices will now be open at peak times, between 7am and 10am, Monday-Friday. At the times that the station ticket offices are not open, Govia are proposing to relocate the ticket selling equipment to a station hosting point so the staff are available on the concourse from the first to last train. These staff will have a portable ticketing machine and will be able to offer help and advise to rail users and will be able to provide a full range of tickets. Govia have also announced that station facilities, such as waiting rooms and toilets, will be open for longer and that 63 additional ticket machines will be installed at the stations they manage. Govia Passenger Service Director, Keith Jipps commented: "We think the consultation has been a success as we've been able to listen to our passengers and modify our proposals to meet their needs now and in the future. We believe our new station hosts will be of great benefit to our passengers, providing assistance for more hours each day with the same tickets available as today. "Where sales from ticket offices are low, Govia wants to bring staff out from behind the windows and on to the concourse to work where they're needed most, as Station Hosts, providing assistance and helping sell tickets. All the modernised stations will be staffed from the very first train to the very last, seven days a week." Govia plan to introduce the changes at some pilot stations to see how they go before rolling them out across all stations. Mr Dowden said: "I continue to have concerns about the move away from station ticket offices, only time will tell if the new Station Hosts are able to provide the full range of services that are currently provided by ticket offices. As I have said before, the phasing out of ticket offices does represent a cultural change and I sympathise with the concerns that have been expressed to me by constituents. "However, I am glad that Govia appear to have listened to concerns and have amended their plans so that the ticket offices at Borehamwood and Radlett stations will now be open between 7am and 10am. I note also that the two main rail travel consumer groups, London Travel Watch and Transport Focus have dropped their opposition to Govia's plans." Mr Dowden added: "I will be closely monitoring whether or not the proposed changes are successful at the pilot stations."