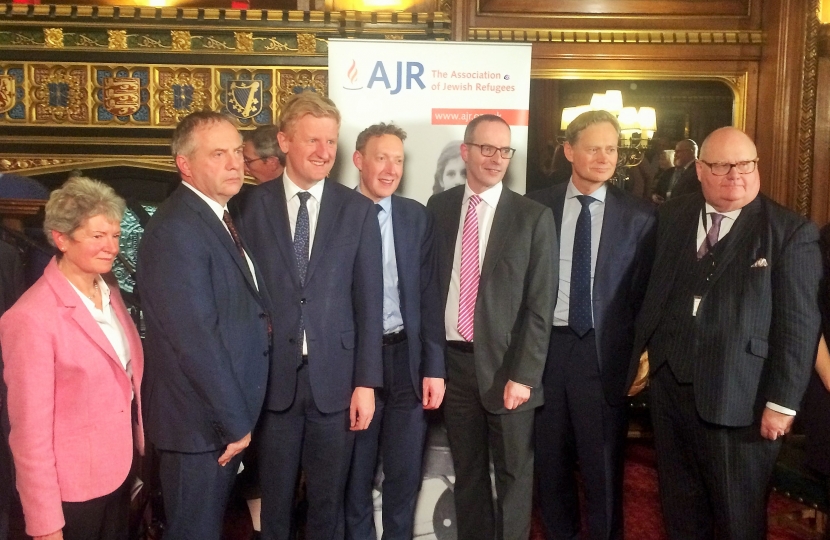 Oliver last week spoke at the event in the Speaker’s House in Parliament commemorating the 80th anniversary of the Kindertransport.

The Kindertransport is the name for the organised evacuation of thousands of children from Europe to Britain in the year before the Second World War, saving them from the coming Holocaust perpetrated by the Nazis.

The event was organised by the Association of Jewish Refugees, the national charity supporting Holocaust refugees and survivors living in Great Britain.

Oliver was one of a number of Parliamentarians who read extracts from the debate in the House of Commons on 21 November 1938 over the decision to accept Jewish refugees fleeing persecution in Nazi Germany and elsewhere in Europe.

Speaking after the event, Oliver said: ‘It was an honour to take part in this evening commemorating the Kindertransport, the extraordinary effort which saw nearly 10,000 children brought to Britain and saved from the horrors of the Holocaust.

‘Listening to the other extracts from my Parliamentary colleagues, and the testimony of survivors was a moving experience.’

Also in attendance was Mr Harry Spiro, a Radlett resident and Holocaust survivor and Oliver added: ‘It was pleasure to meet Mr Spiro again last night. Events like this are vital in making sure that as a country and a community we remember the Holocaust and never forget what history has taught us.’

Oliver has been a long standing supporter of the Holocaust memorial efforts. Until his promotion to his Ministerial position, he served as Chair of the All-Party Parliamentary Group for British Jews and as an Officer of the Conservative Friends of Israel.

One of our great strengths in Hertsmere is the diversity of our community locally, and one of the great joys of being Hertsmere’s MP has been making a huge range of informative and enjoyable visits with the different communities in the borough.