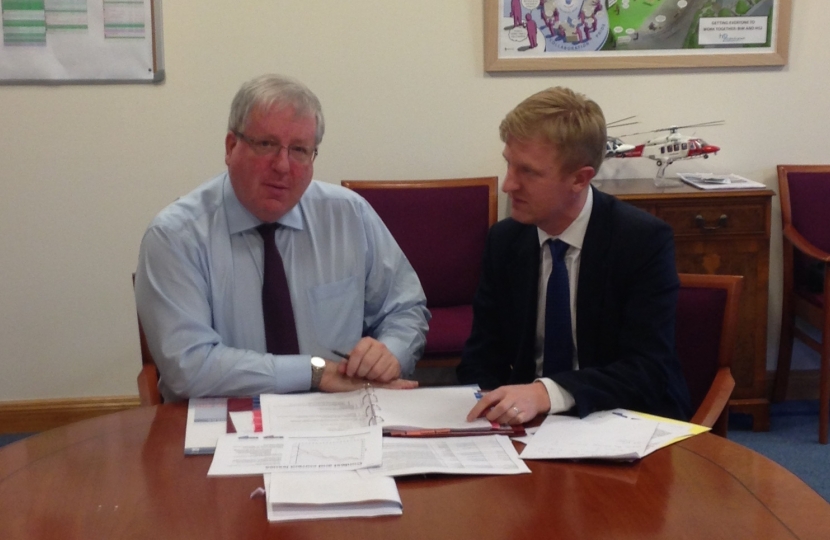 Oliver Dowden, Conservative PPC for Hertsmere, met with the Chief Executive Officer of Govia - the new operators of Thameslink – Charles Horton, and the Secretary of State for Transport, Patrick McLoughlin, to discuss the company's poor performance since it took over the Thameslink franchise. He was joined by incumbent MP, James Clappison, and other local MPs, including Anne Main.

Oliver Dowden highlighted the poor performance of the company, including excessive delays and repeat cancellation of trains, particularly in the run up to Christmas, and demanded answers from the company.

Mr Horton promised that the company would be investing in extra drivers and additional capacity, as well as improving customer information. He blamed many of the cancellations on training drivers on the new route through London Bridge.

Mr McLoughlin was clear that Govia had to improve its performance and had sought reassurances that they would. The Transport Secretary said that the Government was:

"Investing record amounts in improving journeys for passengers including the £6.5bn Thameslink programme, which will transform travel on this route when it is complete in 2018".

Mr Mcloughlin was clear that Govia had to improve its performance and had sought reassurances that they would.

“Like thousands of others, I endure the misery of our daily commute being continually blighted by delays and cancellations on Thameslink.

“Thameslink have got to up their game.

“Thanks to prudent management of the public finances, the Conservatives are investing billions on improving infrastructure on the Thameslink line.  Now Govia need to deliver on their side of the bargain too".