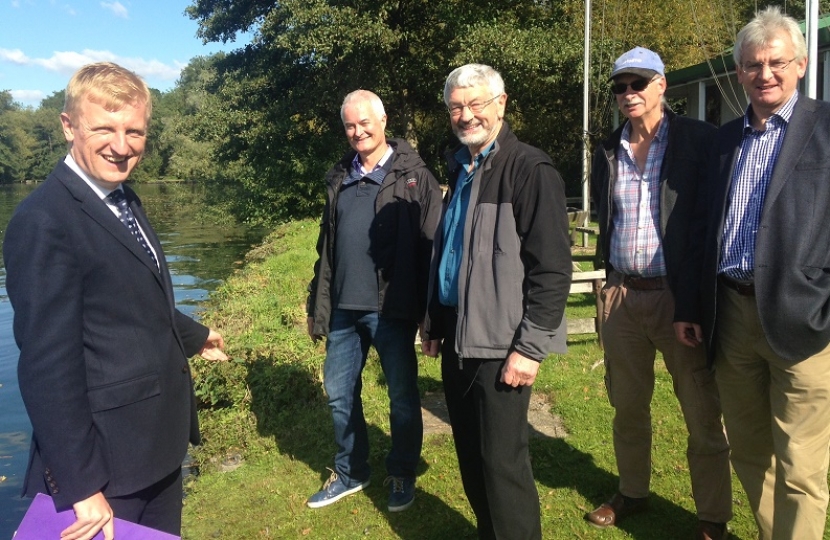 Oliver has re-affirmed his support for the campaign to preserve Aldenham Reservoir. The commitment came following news that Liberty Aldenham have notified Aldenham Sailing Club that they intend to partly drain the reservoir and fence off the surrounding area from the public.

Since receiving the news, Oliver has been in contact, the Sailing Club, local residents groups and the Leader of Hertsmere Borough Council, Morris Bright.

Following that conversation with Cllr Bright, Oliver said: ‘I was extremely concerned to hear of these proposals. However, I fear this may be scaremongering. I understand from Cllr Bright that Liberty Aldenham currently have not sought nor obtained permissions from either Hertfordshire County Council or the Environment Agency to lower the water levels in the reservoir.

‘I have now written directly to the Environment Agency and tabled a number of Parliamentary Questions in order to gain clarity on the process and permissions required for such a draining.

‘I know Hertsmere Borough Council are also looking into this as a matter of urgency and I stand ready to support in any required at a national level.’

‘The reservoir is a key community asset and has been enjoyed by many families, including, my own family, for generations. We must fight to defend it.’

In December 2015, Hertfordshire County Council’s lease of Aldenham Reservoir expired and the ownership of the reservoir passed from Safari Investments to Liberty Lake Leisure, previously named Liberty Aldenham. Liberty Lake Leisure has bought the lake after an earlier scheme to repair the reservoir’s dam in return for permission to build homes on nearby green belt land was rejected by Hertsmere Borough Council.

A new application for outline planning permission to build 150 homes on the land owned by Liberty Aldenham was re-submitted to the Borough Council in July this year (Ref 16/1302/OUT). Permission for this was again refused on 19 October 2016 by the Council.